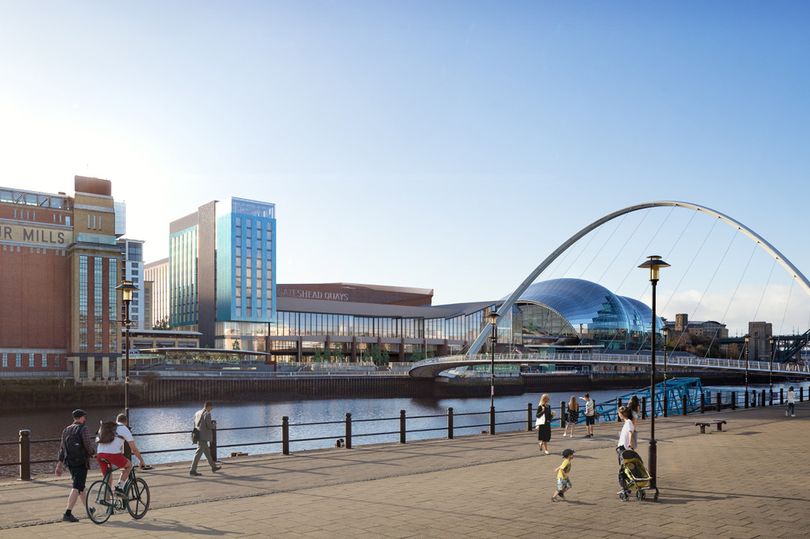 New images of a £260m Tyneside redevelopment scheme on Gateshead Quays have been revealed ahead of a public consultation.

The project will see the construction of a huge waterfront development that will include a 12,500-seat arena, a conference and exhibition centre, as well as a number of hotels, cafes, bars and restaurants.

The site is being developed by Ask Real Estate and Patrizia UK in partnership with Gateshead Council in plans which are hoped will create more than 1,100 jobs.

Once completed, Gateshead Quays could plough an extra £30m into the local economy each year, while also attracting an extra 296,000 visitors to the North East.

Designs for the surrounding leisure and entertainment complex, based on land between the Sage Gateshead and Baltic Centre for Contemporary Art have been revealed by the development team behind the proposals as they seek involvement from the community in a public consultation next Thursday.

The meeting will also allow members of the public to view the plans.

The development team has appointed the Newcastle office of national planning and development consultancy Lichfields to facilitate the planning process.

A focal part of the proposals is a 12,500 seat arena, designed in a bowl shape featuring fixed, retractable and removable seats.

The venue will act as a replacement for the Utilita Arena on the other side of the River Tyne and is hoped to open in 2023. Leisure group SMG Europe has already been confirmed as the operator of the new centre.

A spokesman for Lichfields said the development team has already held consultation events for local stakeholders and would now like to welcome the public to be part of the planning process.

The consultation will take place on February 27, between 3pm and 7pm, at St Mary’s Heritage Centre, Oakwellgate, Gateshead.

The plans will be viewable at www.askrealestate.co.uk/gq-consultation following the exhibition.