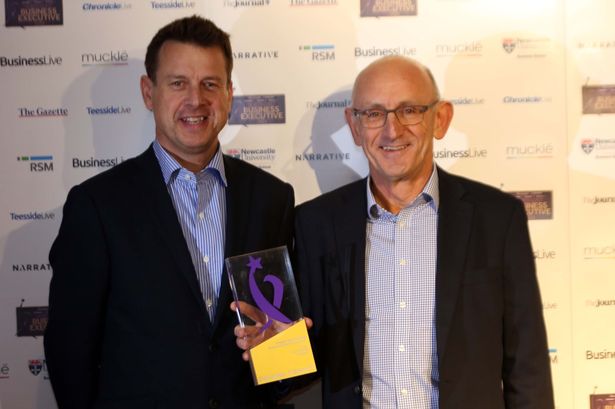 The man who has steered the transformation of traditional bakery giant Greggs into a national food-on-the-go success has been crowned this year’s North East Business Executive of the Year.

Roger Whiteside has held the top job at North Tyneside based Greggs for six years, over which time he has led a the strategy to convert the firm from a high street bakery to a popular food-on-the-go brand with more than 2,000 shops and an army of loyal customers and employees.

As well as being much-loved in its native North East, Mr Whiteside’s strategy has ensured the company has become one of the biggest names in its sector, even beating the likes of Cadbury’s and Netflix to recently win the coveted Brand of the Year prize.

Mr Whiteside’s contribution to the North East business community – and the UK – was recognised when he took the top trophy at the grand final of the North East Business Executive of the year Awards event, run by The Journal and held at The Boiler Shop in Newcastle.

Mr Whiteside said: “Obviously I’m delighted personally, but I don’t think of this as an individual award – it’s more a reflection of the fantastic team effort.

“There is no way we could achieve what we do without it being a team effort, and most of them are back in the headquarters where we are doing a 24-hour danceathon which started at 4 pm for Children Need. It’s very popular with the staff, and I shall lend my support doing my dad at the disco dance.

“Obviously we’ve had a fantastic time recently. It’s been seven years since I took over as chief executive, since then we’ve set about transforming the business, moving it away from a traditional bakery to a food-on-the-go business.

“But really all of that time has been spent getting to the start line and what comes next is building on that platform to becoming a multi-channel business, serving customers at all times of the day, wherever they are and giving them what they are looking for.

“We are number three for coffee after being Starbucks, we are number two and breakfasts just behind McDonald’s now ahead of Tesco’s for lunch. But we have 5% of the market in food on the go – that’s 95% to go at. So these are exciting times and there’s a lot to do.”

Around 200 business leaders were at the awards, which were hosted by actor, writer and presenter Alexis Conran, former presenter of BBC Three show The Real Hustle.

Graeme Whitfield, North East business editor for Reach plc, opened the proceedings saying: “Meeting some of our shortlisted candidates in their work, seeing what they do and hearing their business philosophies, has been a genuine pleasure.

“At a time when many of you will have noticed that leadership at a national level is in fairly short supply, the people up for prizes tonight are showing ingenuity, resilience and good humour – the qualities, I think, that make this such a great part of the world.”

Mr Whiteside’s award was the last to be presented, having earlier in the evening also won the title of Tyneside and Northumberland Business Executive of the Year.

For the first time, the Northumbrian Association used the event to present the Hotspur Award, which recognises ‘bold endeavour’ to promote the North East.

The award was won by John and Irene Hays, the founders of Hays Travel, who recently acquired the entire retail estate of the collapsed holiday firm, Thomas Cook – a move which has also saved around 2,000 jobs.

The couple could not be at the event to collect the award, but sent a video message to the event having been delighted to learn of the award win while out of the country.

The lifetime achievement award was won by Paul Callaghan, to celebrate his work in the worlds of business, politics and the arts.

Mr Callaghan formed Leighton in the early 1990’s which has become one of the UK’s leading digital agencies, and he has also had a strong focus outside of his own companies, having been a member of many boards and organisations across the UK, striving to make the North East a better place in which to live and work.