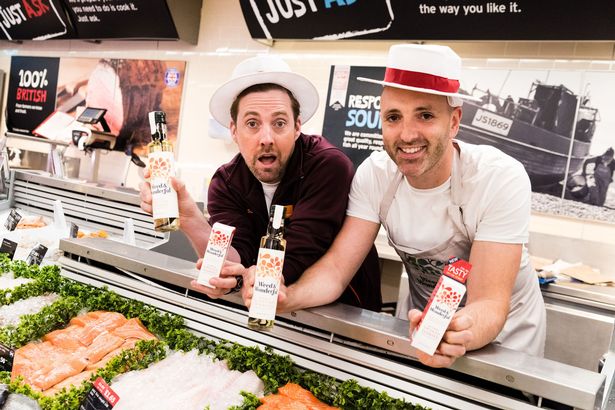 A North East marine biologist and his pop star pal are toasting a successful start to the year after their culinary creation landed major stockist deals.

Dr Craig Rose, founder of Whitley Bay based Seaweed & Co, is on a mission to encourage everyone to embrace seaweed as a super food.

Last year he teamed up with his childhood friend Ricky Wilson, lead singer with indie band the Kaiser Chiefs and a former judge on TV talent show The Voice, to launch a range of seaweed-infused oils called Doctor Seaweed’s Weed & Wonderful.

The musician sparked interest in the oils when he went on Great Celebrity Bake Off and used Seaweed and Co products in his scones, which won a firm thumbs-up from an initially sceptical Paul Hollywood.

Soon after launch they won deals to stock the oils and seaweed nutritional supplements in Sainsbury’s and Holland and Barrett stores nationwide.

Now Seaweed & Co is expanding further across the UK, as consumers strive to cut their intake of meat and embrace a more plant-based diet.

The Weed & Wonderful range of culinary oils is available in Lakeland stores across the UK and its Pure Organic Seaweed Capsules are launching in select Boots stores and on Boots.com this month.

Dr Rose had long dreamed about creating a business that was environmentally and commercially sustainable.

Seeing that people were becoming increasingly conscious about where their food came from, he approached Virgin StartUp for a £25,000 Start Up Loan to launch his company.

The business began by supplying food and nutrition manufacturers with a range of seaweed products sourced exclusively from the Outer Hebrides.

It was last summer that the Weed and Wonderful range was launched, and it has since won a Great Taste award.

He said: “I’ve always been an advocate of the benefits of seaweed and launched Seaweed & Co after noticing the trend towards healthier and ethically-sourced food. It’s brilliant to see that I was right to take the chance on an alternative product, and a forgotten food.

“It’s a huge milestone for the business to have launched nationwide in Lakeland, and in good time to offer people some great tasting and healthy New Year inspirations.

“We’re also excited to have expanded to such an iconic British store as Boots and are looking forward to further expansion during 2020. None of this would have been possible without the support and advice we received from Start Up Loans.”

Richard Bearman, managing director of Start Up Loans, said: “We’re delighted to have helped Craig kickstart such a fantastic business. Growing a business can be tough and his success shows what’s possible when you combine a great idea with passion and determination.”

Andy Fishburn, managing director at Virgin StartUp, added: “Virgin StartUp is proud to have supported Craig and the team at Seaweed and Co. Craig is a true entrepreneur who saw a niche gap in the market and created mainstream demand for it. We love to see brands like Seaweed and Co. promoting a more sustainable lifestyle and look forward to seeing them go from strength to strength.”