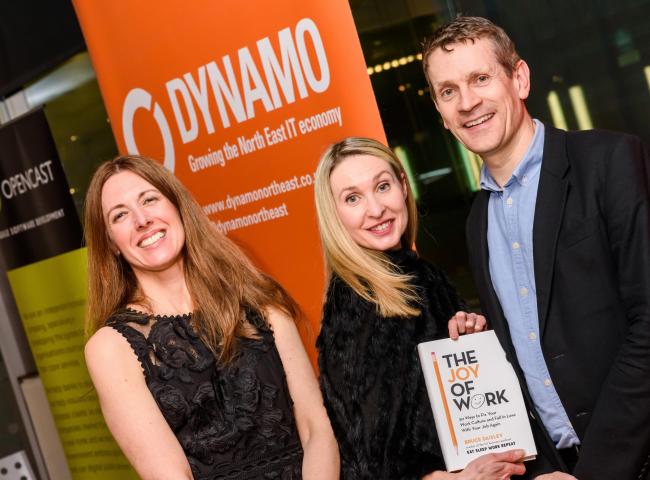 THE growth and success of the region’s tech sector is being recognised at the highest level, according to one of the world’s most influential social media figures.

Bruce Daisley, Twitter’s Vice President for Europe, Middle East and Africa, was the guest speaker at Dynamo’s Annual Dinner, a key event for the region’s IT and digital sector.

Speaking before the dinner at the BALTIC Centre for Contemporary Art on Thursday night, Mr Daisley said: “I think that over the last 18 months or so there’s been a recognition in London and across the country that there is a nascent tech sector in the North-East and things are really happening.

“We’ve seen more and more firms from the area reaching out to us and there is certainly more coverage of things happening in the North-East nationally. It’s clear the region is on the tech map now. Every time I come to the region I can see so much change, new developments, new tech companies.

“It’s hardly surprising really, if you’re starting out on a career in tech and looking to London you’ve got to think that you won’t be able to own your own house and the balance between work and home might not be want you want.

“The North-East is an attractive place where the work/life balance is perhaps easier to achieve and is a great place to build a career in tech.”

Birmingham-born Mr Daisley knows the area from a previous career in radio. After graduating with an Economics Degree from York University, Bruce started his career at Virgin Radio before joining Emap Advertising, becoming Digital Director. He then joined Google, working at subsidiary You Tube as a Director. He joined Twitter in 2012.

He is a respected commentator on workplace culture, challenging some of the ‘science’ behind contemporary working practices in his new book The Joy of Work: 30 Ways to Fix Your Work Culture and Fall in Love with Your Job Again. His podcast Eat Sleep Work Repeat regularly sits at the top of Apple’s business podcast charts.

He said that although tech companies have encouraged working practices across the business world, some have also encouraged bad habits.

He said: “There’s this image of tech companies with office slides and beanbags and that they’re all innovative and caring, but that’s only part of the picture. Elon Musk’s comments about not being able to achieve anything without working an 80-hour week were not helpful and put people under unnecessary pressure.”

Mr Daisley also talked about social media companies’ responsibility to ‘clean up’ the likes of Twitter, Facebook and Instragram and make them more positive places to share views and stories.

He said Twitter is introducing new measures to encourage more ‘healthy conversations’, adding: “Our perspective is that Twitter should be a safe place for good conversations about family, sport, politics and so much else. It’s also a place where two sides of an argument can be heard – but there are times where there is an empathy gap, where people make comments without appreciating that the person they’re talking to or commenting is a real person.

“There are people with extreme views who give extreme opinions in order to get attention and followers – they know the game to play and we all need to do more to ensure more balance on social media.”

Before speaking at the Dynamo dinner, Mr Daisley addressed pupils from three schools at a talk given at the North East Futures UTC, the new school specialising in IT and health sciences which opened in Newcastle last year. He talked to pupils from the UTC, Walker Riverside Academy and Newcastle RGS about his career and his role at Twitter before answering a range of questions from the students.

At the dinner, attended by more than 100 leaders from the region’s tech sector, Mr Daisley talked about his passion to improve workplaces and the differences to staff satisfaction and productivity that can result in improvements in working environments.

Dynamo is the North-East’s network for the tech sector, with more than 150 members including IT firms, major employers, technology hubs, academia, local government and employer support initiatives. Its mission is to grow the region’s IT economy through collaboration, innovation, skills and reputation.

Dynamo’s co-founder and Chair Charlie Hoult stood down from the position last week to stand as the Conservative candidate for the North of Tyne Mayoral election. He has been temporarily replaced by Giselle Stewart, Director of Corporate Affairs at games giant Ubisoft.

For more information on Dynamo, or on its forthcoming Dynamo 19 conference at the University of Sunderland on June 20, log on to www.dynamonortheast.co.uk