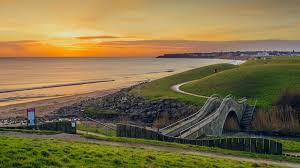 Conde Nast Traveler has voted Whitley Bay in North Tyneside one of the coolest, most most under-the-radar neighbourhoods in the UK. Here’s what they said:

A decade ago not even a reckless gambler would have wagered on Whitley Bay becoming Tyneside’s hippest hangout. Spanish City, the Taj Mahal-like seafront pleasure dome celebrated by Dire Straits, was derelict, the streets a stag-party purgatory. A hint that things were changing came when chef Gary Dall took over a down-at-heel Sixties shop and turned it into a sensational restaurant, The Roxburgh. Asked why he’d done it, Dall said, ‘Because there was nowhere playing The Velvet Underground and serving bone marrow’

Yet over the past few years the scene here has eclipsed those in Newcastle’s more feted Ouseburn and Heaton. The epicentre of the renaissance is just around the corner from the Roxburgh in Park View and its rows of pretty Edwardian artisans’ houses. Here you’ll find a cool crew checking out the latest wheels at Whitley Bay Skate Club, Carhartt-clad customers considering whether they need to buy a mandolin at Hound Dog Music, tweedie craft-ale aficionadas sampling the latest cloudy brews at Nord Bottle Shop and brunched-up Geordie pals spilling out of Kith & Kin. There’s a great bakery, Pure Knead, the permanent set-up of veteran street-food hero Papa Ganoush and genuine home-cooking at Sangeeta Chopra’s little shop/café Namaste Taste of India.

Given Tynesiders’ commitment to beer and talking, it was no surprise that locals embraced the micropub trend, with chat-oriented examples including The Dog and Rabbit, the Storm Cellar and The Split Chimp. In August there’s an imaginatively staged film festival (watching Jaws in a marquee on the beach was a highlight) and Spanish City has finally been restored to its glimmering white splendour. At night you can drink French 45s in the upper floor Champagne bar and gaze at the ships’ lights twinkling on the North Sea. By Harry Pearson